Tomb of Shaykh Salim Chisti: Overall view of the mausoleum within the mosque courtyard 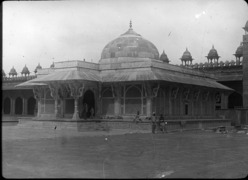 Sufi holy man Shaykh Salim Chisti (1479-1572) established his hermitage on the ridge at Sikri in 1537; Akbar consulted with him. His tomb is part of the Jami‛ Masjid mosque complex built by Akbar. The tomb bears a date of 1581-1582, but its present white marble exterior was probably commissioned ca. 1605 by Jahangir (reigned 1605-1627). The tomb is square in plan with a porch at the front reminiscent of the porches of Hindu temples. The central chamber is enclosed by a screened verandah, serving as a circumambulatory. Its white marble lattice screens (jali) are among the finest examples in India. The building is shaded by a broad slanting stone projection (Hindi chajja) supported by graceful serpentine brackets. Each bracket is monolithic with lacelike floral and geometric patterns carved in the spaces between the curves. After Fatehpur Sikri was abandoned in 1605, the tomb of Shaykh Salim Chisti remained a pilgrimage centre, maintained by his descendants.