Papal Basilica of Saint Francis of Assisi: Interior, vaulting of a chapel in the Lower Church 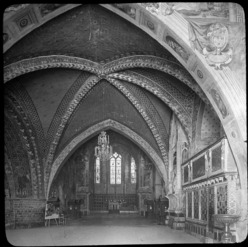 Founded in 1228 following the canonization ceremony for St. Francis, it is the mother church of the Franciscan Order. The building established many of the characteristics of Italian Gothic architecture. It is built into the side of a hill and comprises two churches known as the Upper Church and the Lower Church, and a crypt where the remains of the saint are interred. The fact that the building had to fulfill two functions, as a conventual church for a mendicant order and as a great centre of pilgrimage, may have dictated its double form. It is decorated with frescoes by numerous late medieval painters from the Roman and Tuscan schools, and includes works by Cimabue, Giotto, Simone Martini, Pietro Lorenzetti and possibly Pietro Cavallini. It is a UNESCO World Heritage Site since 2000.