Migrant Mentalities: Reconstructing the Community, Identity and World of Venetian Merchants in the Late Medieval Mediterranean 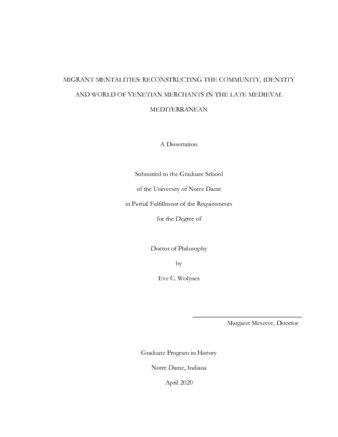 In this dissertation, I explore how late medieval Venetian merchants developed unique mentalities about space, geography, time, and trust in their sense of identity and community. The thirteenth to fifteenth centuries saw the advent of sedentary trade, wherein merchants lived abroad for longer periods of time than ever before, a transition away from travelling constantly with their wares. This transition, I argue, led them to become migrants who participated in and sustained long-distance networks and communities. I examine two types of “public” primary sources written by Venetian merchants between 1204 and 1453: Merchant manuals of comparing weights, measures, exchange rates and common goods sold between regions, organized geographically, and the crusade propaganda letters of Marino Sanudo Torsello. With these two genres, I explore how merchants interacted with others in their various long-distance communities both within and beyond merchants’ networks. As a result of that participation, they adopted new relations to communication and information that in turn informed a wide variety of attitudes: they focused on the value of connections between regions and shifted their perspectives of the Mediterranean to look at the way different cities tied to one another; their use of merchant manuals to spread information also predicated spreading shared senses of space and imaginary geographies. They saw trade as a vehicle for sustaining non-mercantile networks through self-interested mutual goals among disparate regions, as well as Christendom as a whole. They transformed trade into an act of Christian service. As they engaged with long-distance communication that overlapped past, present and future, they altered their relationship with time: merchants hoarded knowledge from the past and turned to astrological divination of the future to utilize every tool in their arsenal for gathering information. Finally, the importance of communication in their networks led them to place exceptional importance on access to and control of information: they emphasized authority and trust derived from the experience of travel and the prestige of long-distance specialization.