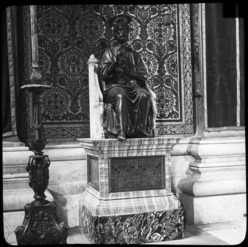 Portrayed as he gives a blessing and preaches, while holding the keys to the kingdom of heaven. The foot is worn thin from centuries of being touched by pilgrims. The backdrop is a mosaic.

The bronze figure of St. Peter in St. Peter’s, Rome, was based on the antique statue of a philosopher (now Rome, Grotte Vaticane), remodelled to represent Peter. The long-disputed dating of the bronze figure to the late 13th century, first advocated by Wickhoff (1890), was confirmed by an analysis of the bronze alloy undertaken by Bruno Bearzi in 1957 (Salmi, 1960).