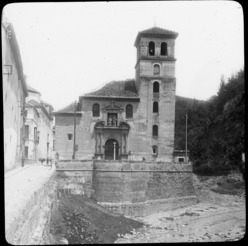 Mudejar church built between 1559 and 1567 at the foot of the Alhambra, on the site of the Baths of the Mosque. It is built in the Renaissance style and has the ground plan of a Latin cross with a single nave. Over the doorway stand two niches and the figures of the Saints Peter and Paul, the patron saints of the church, stand between two Corinthian columns. There is a bell tower. The vault features mocarab plasterwork decoration and sculptures from the 16th and 17th centuries, by the hand of artists such as Pedro de Mena.