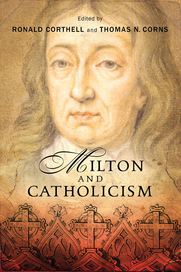 This collection of original essays by literary critics and historians analyzes a wide range of Milton’s writing, from his early poetry, through his mid-century political prose, to De Doctrina Christiana, which was unpublished in his lifetime, and finally to his last and greatest poems. The contributors investigate the rich variety of approaches to Milton’s engagement with Catholicism and its relationship to reformed religion. The essays address latent tensions and contradictions, explore the nuances of Milton’s relationship to the easy commonplaces of Protestant compatriots, and disclose the polemical strategies and tactics that often shape that engagement.

The contributors link Milton and Catholicism with early modern confessional conflicts between Catholics and Protestants that in turn led to new models and standards of authority, scholarship, and interiority. In Milton’s case, he deployed anti-Catholicism as a rhetorical device and the negative example out of which Protestants could shape their identity. The contributors argue that Milton’s anti-Catholicism aligns with his understanding of inwardness and conscience and illuminates one of the central conflicts between Catholics and Protestants in the period. Building on recent scholarship on Catholic and anti-Catholic discourses over the English Tudor and Stuart period, new understandings of martyrdom, and scholarship on Catholic women, Milton and Catholicism, provides a diverse and multifaceted investigation into a complex and little-explored field in Milton studies.