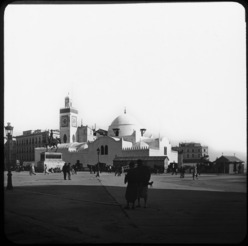 The minaret is also a clock tower.

The New Mosque (Jamaa-el-Jedid), dating from the 17th century, is in the form of a Greek cross, surmounted by a large white dome, with four small cupolas at the corners. The minaret is 90 feet (27 m) high and is also a clock tower. The interior resembles that of the Grand Mosque. The French called it Mosquée de la Pêcherie, Mosque of the Fishers, because of its location near the sea. It was built under Ottoman rule.