Mezquita: Interior view, the old arches of the Mexquita visible from nave crossing 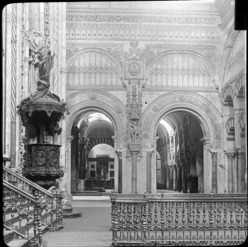