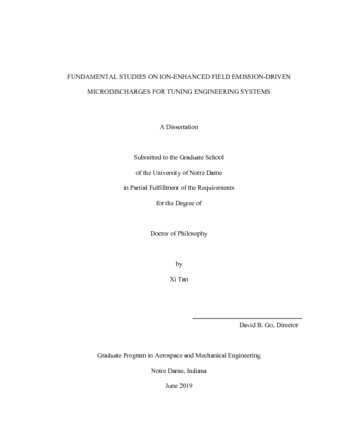 Microplasmas or microdischarges have been attracting a growing amount of interest from the low-temperature plasma community due to many of their favorable properties. In microscale geometries, such non-equilibrium plasmas have a high aspect ratio and, therefore, are strongly influenced by boundary-dominated phenomena. Especially for microplasmas at extremely small scales less than 10 µm, the ultra-high aspect ratio can result in two unique features: ion-enhanced field emission on the cathode surface and highly non-local electron kinetics. This dissertation work aims to fundamentally understand and therefore establish the basis for designing the unique features of microplasmas at extremely small scales into plasma engineering systems.

The work first investigates the resonant tunneling behavior in ion-enhanced field emission by solving the one-dimensional time-independent Schrödinger’s equation in the presence of an ion, and evaluates the enhancement in field emission due to resonant processes. Results shows that as the applied electric field decreases or as the ion moves closer to the cathode, the resonant states shift up in energy. These shifts of resonant states directly impact the emission current density, especially when the applied field is about 0.5–3 V/nm and the ion is about 0.5–3 nm away from the cathode. Further, when the energy level for resonant emission coincides with the Fermi level of a metallic cathode, the current density is particularly enhanced. Through a simplified perturbation analysis, an expression for resonant energies is derived to predict the general scaling of these trends. The work suggests that it may be possible to control (augment/inhibit) the resonant emission current by manipulating the supply function of a cathode relative to the microdischarges operating conditions.

This work also explores the highly non-local electron energy distribution (EED) and the scaling of rate coefficients in microscale field emission-driven Townsend discharges via one-dimensional particle-in-cell/Monte-Carlo-collision (PIC/MCC) simulations. To better understand the scaling, a pseudo-analytical model is developed for the spatially integrated EED and rate coefficients in the transition from the collisional to the collisionless regime based on the weighted sum of a two-temperature Maxwellian EED and a ballistic EED. Results show that at these extremely small dimensions the EED’s and rate coefficients scale with E/p and pd separately, demonstrating the potential of controlling the EED in microplasmas for reaction selectivity. To demonstrate this potential, this work looks into the selectivity for the asymmetric vibrational excitation to potentially promote carbon dioxide (CO2) dissociation in microscale plasma-catalyst systems. The results suggest that field emission-driven microdischarges could form the basis for intentionally coupling the plasma state with a catalyst for improving the performance of CO2 reforming.