Plasma Slats and Flaps: An Application of Plasma Actuators for Hingeless Aerodynamic Control 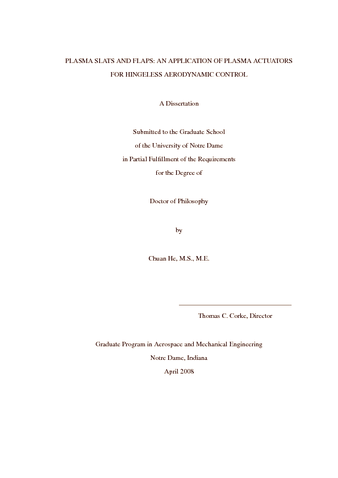 Currently a great deal of interest within the community is to utilize the emerging flow control technology to design revolutionary air vehicles without moving control surfaces while still maintaining controlled flight. This work is focused on the application of plasma actuators to control separation on the wing in a manner that will replace the leading-edge slat and trailing-edge flap.

The experiment examined the use of plasma actuators at the leading edge to control separation, and at the trailing edge, to control lift on NACA 0015 airfoil. At the leading edge, the actuator was operated in both “steady” and “unsteady” manner. The steady actuator was able to reattach the flow for angles of attack up to 19Ìâå±, which was 4Ìâå± past the normal stall angle. Even better performance was found with unsteady actuation, which was able to reattach the flow up to a 9Ìâå± past the normal stall angle. The leadingedge separation control resulted in a increase in both CLmax and astall . It resulted in an L=D improvement of as much as 340%. The trailing edge actuator was located on the surface of one side of the airfoil at x=c = 0:9, and spanned most of its width. When operated in a steady manner, it was found to produce the same effect as plane trailingedge flap.

The plasma actuators were found to control the separated flow over the V-22 wing section and reduce the drag. At both 10 m/s and 20 m/s the flow separated relatively evenly over the leading and trailing edges of the wing section. Each of the actuators operating separately, were able to reattach their respective flow regions. When operated together, they gave a combined effect that was approximately the sum of their individual effects. Overall with both actuators operating the drag coefficient was lowered by 44% and 27% respectively.

An experiment was conducted to control the leading-edge vortex breakdown on a 1303 UCAV planform at high angles of attack without moving surfaces using plasma actuators. Optimum lift enhancement was achieved by placing the actuators at a chordwise location that was close to the leading edge on the suction side at x=c ‘ 0:03. The actuators were placed parallel to the leading edge and were operated in the unsteady mode. For these, the actuators on the inboard half of the wing was only effective for angles of attack greater than 20Ìâå±. The actuator on the outboard half of the wing was, however, effective for angles of attack from 9Ìâå± up to the largest angle examined, 35Ìâå±, for which the conventional trailing-edge flaps were ineffective. The results suggests that the application of plasma actuators on a swept UCAV planform can alter the flowfield of the leading-edge vortex in a manner that allows control without the use of hinged control surfaces.

In order to obtain the lift enhancement controllability at low angles of attack, a wall-mounted hump model was selected in this study as a canonical turbulent separated flow field. Both spanwise and streamwise plasma actuator configurations were investigated at a chord Reynolds number of $Re_c=288$,K. The surface pressure coefficients demonstrated that both configurations increased the pressure level in the separation region, and significantly reduced the size of the separation bubble. For the same conditions, both configurations achieved the similar performance.

Numerical simulations using Reynolds-averaged Navier-Stokes solver were performed to predict the flow field over the wall-mounted hump model with both spanwise and streamwise plasma actuators on and off. For base flow, $SA$, $k$-$epsilon$, and $k$-$omega$ turbulence models were used and all of them predicted the surface pressure coefficient in good agreement with the experimental data. $k$-$epsilon$ model was chosen for the controlled cases. The plasma actuator effect was simulated through a body force model. For both spanwise actuation and streamwise actuation, computations agreed with experimental data very well except around the reattachment region. Details of the flow field were also examined through streamlines, vorticity magnitude, velocity vector field, surface static pressure contour, and surface streamlines.