Akragas (Agrigento): Remnants of the Temple of Herakles 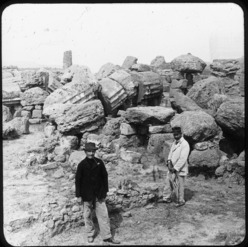 The so-called Temple of Herakles, at the south-west edge of the city, was the earliest example of Doric monumental architecture from after 500 BCE and was perhaps founded by the tyrant Theron (reigned 488-472 BCE).

Greek colony on the southern coast of Sicily. Believed to have been founded ca. 580 BCE from Gela, a city further down the coast, it flourished as an independent state until 406 BCE, when it was sacked by the Carthaginians. It maintained some degree of independence until the Roman conquest of Sicily in 210 BCE. The extensive town, lying some 2 km from the sea, was enclosed by walls following natural precipices and includes a steep acropolis now occupied by the modern settlement. Only a small part of the residential area has been excavated, dating to the Hellenistic and Roman periods; it was organized in regular, rectangular blocks after the Hippodamian system. The so-called Temple of Herakles, at the south-west edge of the city, was the earliest example of Doric monumental architecture from after 500 BCE and was perhaps founded by the tyrant Theron (reigned 488-472 BCE). Its plan reflects that of late Archaic temples in mainland Greece, such as the Temple of Apollo at Delphi: both have a colonnade of 6 by 15 columns arranged symmetrically around a cella with pronaos and opisthodomos. There are also local Archaic features, including the shape of the capitals and almost no angle contraction. The temples of the later 5th century BCE are of a size similar to that of mainland temples. The temples D (to Hera Lakinia) and F (Concord) in the south-east of the town (ca. 450 BCE and 425 BCE respectively) differ only in minor details and a more accurate execution in the later building. Both have double angle contraction (Temple D only at the eastern front). Temple F is one of the best-preserved ancient temples in the world. Temples D and F, together with the Temple of Zeus and the so-called Temple of Herakles, are arranged scenographically on a ridge at the southern boundary of the town (Valle dei Templi).