Basilica of Saint Domenic: Facade, with bronze statue of St. Dominic on column 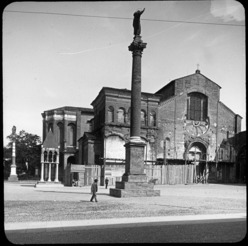 The Romanesque façade dates from ca. 1240 and was restored in 1910 by the architect Raffaele Faccioli.

Church dedicated by Innocent IV in 1251 to St Dominic. It has been enlarged several times, and the present interiors are the work of Carlo Francesco Dotti, who remodelled (1728-1732) the church in the early 17th-century Bolognese style. It is notable chiefly as the home of the tomb of St Dominic, the Arca di S Domenico. The design of the tomb is generally credited to Nicola Pisano (now altered, with sculpture dispersed). The tomb statuary was later supplemented with figures by Niccolò dell'Arca and Michelangelo.