Saint Peter in Mistail: Overall view, seen from above 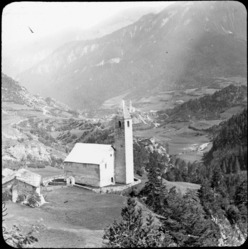 Located in a tiny village, population 143 (Dec 2009). The original majority language was Romansh (Mistail is the Romansh name.) The church of St. Peter is listed as a Swiss heritage site; it is considered the only largely preserved Carolingian three-apse hall church in Switzerland. The present church was built around 800 AD and belonged to a monastery complex that by 1154 had already been abolished. There are still fragments of Carolingian wall paintings inside.