Windsor Castle: View from the Lower Ward looking towards the motte and Round Tower 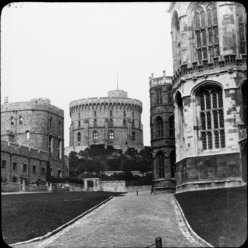 The castle remains centered on the motte or artificial hill on which William the Conqueror built the first castle. Henry II constructed the Round Tower and the original stone outer wall, ca. 1165.