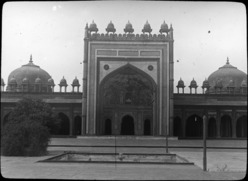 The congregational mosque (Jami‛ Masjid), is the focus of the complex. It is one of the largest and most ornately finished mosques in India. Built on a high plinth, it has a vast central courtyard (133.73 x 109.68 m) with a prayer-hall on the west and arcades on the other three sides. The prayer-hall has three domes, one over the central bay and the others over square bays that form part of the wings. The façade is dominated by the central bay’s high recessed arch, which is set within a rectangular frame surmounted by a parapet and a line of domed pavilions or chatris. The mosque’s rich and varied decoration includes bold geometric patterns of white marble and black slate inlaid in a red sandstone background. The north arcade accommodates the graves of members of Shaykh Salim Chisti’s family.