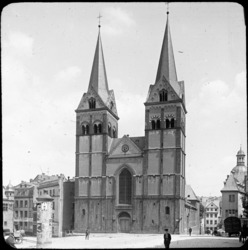 A church has existed on the site since the Frankish Empire. Around 1100 a new building was built under the provost Bruno von Lauffen, who later became Archbishop of Trier, as a three-nave Romanesque church. Gothic additions were made in the 14th and 16th centuries. After the south tower was destroyed in 1791 due to lightning and fire, it was decided to build the present, lower spires. Originally a Marian church, later consecrated (1820) as the first Protestant church building of Koblenz in the Rhineland Evangelical Church.