Work of Love: A Theological Reconstruction of the Communion of Saints 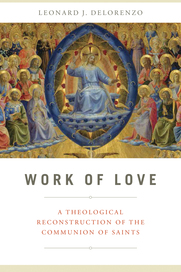 The saints are good company. They are the heroes of the faith who blazed new and creative paths to holiness; they are the witnesses whose testimonies echo throughout the ages in the memory of the Church. Most Christians, and particularly Catholics, are likely to have their own favorite saints, those who inspire and “speak” to believers as they pray and struggle through the challenges of their own lives. Leonard DeLorenzo’s book addresses the idea of the communion of saints, rather than individual saints, with the conviction that what makes the saints holy and what forms them into a communion is one and the same. Work of Love investigates the issue of communication within the communio sanctorum and the fullness of Christian hope in the face of the meaning-or meaninglessness-of death. In an effort to revitalize a theological topic that for much of Catholic history has been an indelible part of the Catholic imaginary, DeLorenzo invokes the ideas of not only many theological figures (Rahner, Ratzinger, Balthasar, and de Lubac, among others) but also historians, philosophers (notably Heidegger and Nietzsche), and literary figures (Rilke and Dante) to create a rich tableau. By working across several disciplines, DeLorenzo argues for a vigorous renewal in the Christian imagination of the theological concept of the communion of saints. He concludes that the embodied witness of the saints themselves, as well as the liturgical and devotional movements of the Church at prayer, testifies to the central importance of the communion of saints as the eschatological hope and fulfillment of the promises of Christ.