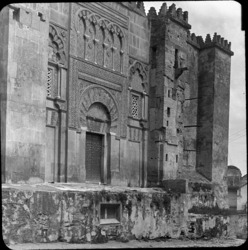 Each door has a blind horseshoe arch inscribed in an alfiz above an arched lintel and are framed with niches and blind arcades that often exhibit such complex arch types as interlaced or polylobed arches.