Château at Amboise: Detail, carved lintel of the Chapel of St. Hubert 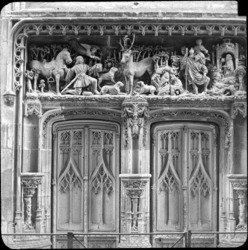 The lintel above the doorway, showing two scenes from the Lives of SS Hubert and Christopher, is the most impressive sculpture to survive and is probably the work of Netherlandish sculptors, including Casin d'Utrecht.

Built in the eleventh century on a promontory overlooking the Loire River to control a strategic ford that was replaced in the Middle Ages by a bridge. Expanded and improved over time, on 4 September 1434 it was seized by Charles VII of France. Once in royal hands, the château became a favourite of French kings; Charles VIII decided to rebuild it extensively, beginning in 1492 at first in the French late Gothic Flamboyant style and then after 1495 employing two Italian mason-builders, Domenico da Cortona and Fra Giocondo, who provided at Amboise some of the first Renaissance decorative motifs seen in French architecture. The names of three French builders are preserved in the documents: Colin Biart, Guillaume Senault and Louis Armangeart.