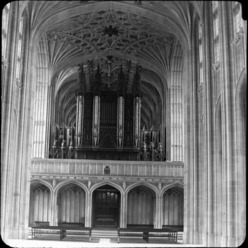 St George’s Chapel is one of the finest examples of Gothic architecture in England. It is the spiritual home of the Order of the Garter, established in 1348 by Edward III. Within the chapel are the tombs of ten sovereigns. The organ loft was built during restoration works in the reign of King George III. The design was by Henry Emlyn and it is constructed of Coade stone (an artificial stone).