Tomb of Islam Khan I: Facade of the mausoleum, topped with chatris 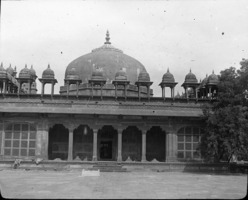 Approximately ten meters to the east of the tomb of Salim Chishti is the larger tomb of Islam Khan I. The tomb, while larger than that of Salim Chishti, is less dominating due to its red sandstone cladding, which blends with the rest of the complex. Islam Khan I (Shaikh Alauddin Chisti, 1570-1613) was grandson of Shaikh Salim Chishti, and became a general in the Mughal army in the reign of Jahangir. The tomb is topped by a dome and thirty-six small domed chattris, and contains a number of graves, some un-named, all male descendants of Shaikh Salim Chisti. The tombs of the women of the Sheikh’s family are found behind the mosque.