Collegiate Basilica of Saint Mary: Detail, exterior staircase and base of bell tower 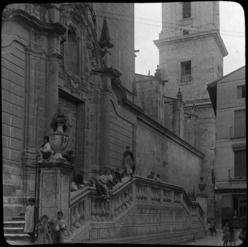 Xàtiva in Valencian, Játiva in Spanish. Xàtiva is noted as the home of the Borgia family, who were from Aragon but settled in Xativa, having been granted lands for service in the Reconquista. The church contains the sepulchral chapel of the Borgias. Alfonso de Borja (Pope Calixto III, 1378-1458) was baptized there. He requested the church be elevated to collegiate status in 1413. The new cathedral was begun in 1596, and building continued into the 19th century. It is a listed national monument since 1931 and a minor basilica since 1973. It is popularly referred to as the Seo (or Seu), the Cathedral.