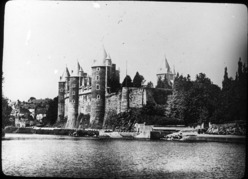 Medieval castle first built in the 11th century and rebuilt at various times since. It has been designated as a monument historique since 1928. Guéthénoc, Vicomte of Porhoët, Rohan and Guéméné, began to build the first castle on the site around the year 1008, choosing a rocky promontory overlooking the valley of the Oust river. Henry II of England and his son destroyed this castle in 1168 and 1175. It was rebuilt and later enlarged in 1370 by Olivier de Clisson; this fortress had 8 towers and a keep 100 yds in diameter. Circa 1490 it was rebuilt; the facade is an early example of Renaissance style. Partially destroyed again by Cardinal Richelieu in 1629, it was restored in 1822. The Castle is still a residence of Josselin de Rohan, fourteenth Duke of Rohan.