Parisian Scholastics and the Gregorian Dictum: Change and Continuity in the Latin Discourse on Images from St. Gregory to St. Bonaventure 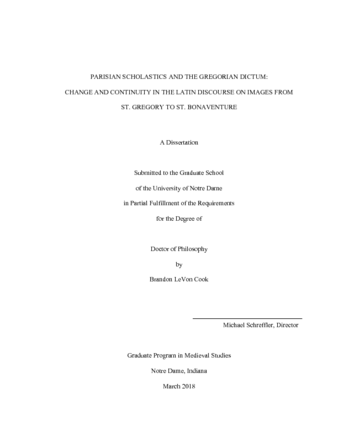 In two letters written ca. 599, Gregory the Great chastised a French bishop for destroying images in the cathedral church of Marseilles; the pope claimed that such visual works benefit the illiterate and literate alike in the now-famous, yet slightly inaccurate paraphrase, “Pictures are books for the illiterate.” Centuries later, as a theology student at the University of Paris in the early 1250s, the Franciscan friar St. Bonaventure composed a three-part statement on the purposes of images in Christian churches that expanded upon the older Gregorian dictum. In the absence of extant Latin treatises on the arts, the Gregorian dictum and Bonaventure’s three-fold justification (triplex causa) constitute valuable textual witnesses to medieval theories of the image. While both authors and statements are well known in the field of medieval art history, no study has systematically addressed the diachronic reception and changing art historical and material emphases of the Gregorian tradition according to a close examination of its textual sources. Furthermore, no study has contextualized the triplex causa within Bonaventure’s thought on images more broadly or even within the theological treatise in which it appears: a commentary on one of the most influential expositions of Christian doctrine in the Middle Ages, Peter Lombard’s Four Books of Sentences.

My dissertation examines the development of the textual tradition of the Gregorian dictum from the sixth century to the Scholastic thirteenth and asks what that textual history reveals about changing emphases in medieval image theory in the Latin West. In particular, this project focuses on the thirteenth-century reception of the dictum and Franciscan Scholastic image theory. I provide a philological analysis of the content, sources, and terminology of Bonaventure’s triplex causa along with the first English translation of the entire scholastic quaestio in which it appears. I also provide the first English translations and analyses of one of the earliest and most extensive Scholastic discussions on images, the Summa fratris Alexandri; this work was composed under the direction of Bonaventure’s master at the University of Paris, Alexander of Hales, and had an undeniable influence on Bonaventure’s own image theory.

My analysis reveals that Bonaventure’s theory synthesizes several strands of thought on the Christian image found in the Latin Fathers, in Byzantine icon theory, as well as in medieval Parisian theology. Through a close reading of the expansive medieval term for artwork (imago), I also show that the initial Gregorian emphasis on two-dimensional artwork eventually gave way to the Franciscan inclusion of and, at times, preoccupation with, three-dimensional works. This research project on the Gregorian tradition and medieval Franciscan image theory furnishes further textual resources and evidence relevant to the longstanding historiographical interest in the relationship between Scholasticism and French Gothic art from the twelfth to the fifteenth centuries.