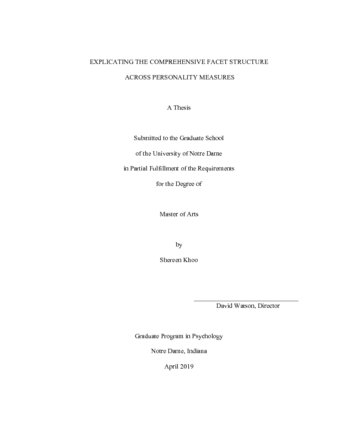 Psychologists have discovered that personality is hierarchical and that different “Big” trait models can be integrated within a single personality framework. This discovery has allowed researchers to integrate research that has historically been investigated based on different “Big” trait models. However, research integrating the different personality hierarchies has stopped at the Big Five/Big Five + Oddity level. One reason for the lack of research on lower order levels of the hierarchy is due to the lack of consensus on the number and content of facets for each domain. In response to this issue, some researchers have investigated the consensual facet structure using scale-level factor analyses of personality inventories. However, this approach is problematic because unique facets, which may have substantial predictive validity, are not able to form their own factors. The present study attempted to replicate the hierarchical personality structure, as well as factor analyzed parcels created from facet scales in order to investigate the comprehensive facet structure. Analyses were run two ways – including and excluding the PID-5 – due to the difference in structure obtained with and without the PID-5. The study results indicate that Extraversion and Agreeableness are best represented in their aspect-level form rather than domain-level form, as well as that certain facet scales are better organized under domains other than their originally intended domains. Finally, the comprehensive facet structure obtained included both consensual facets, as well as aggregations of several unique scales to form unique facets. Theoretical implications, limitations, and future directions are discussed.