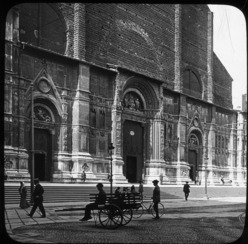 Bologna’s votive and civic basilica is dedicated to Bologna’s patron saint (St. Petronius, eighth bishop of Bologna, reigned 431-450). The Gothic-style church was erected by the Commune between 1390 and the third quarter of the 17th century. Although unfinished, it dominates the skyline and ranks among the largest ecclesiastical buildings in Italy (44.27 m to the crowning of the vaults). Here Charles V was crowned Holy Roman Emperor by Clement VII in 1530. The problem of the great unfinished façade (66 m wide, 51 m high) has never been fully resolved. The present marble socle goes back to Antonio di Vincenzo (1391-1394), while Jacopo della Quercia decorated the Porta Magna with sculpture.