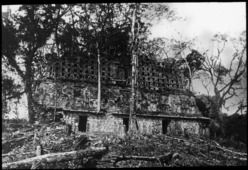 Structure 33, in the Central Acropolis, has been described as a masterpiece in stone and was probably dedicated in 756 by Bird Jaguar IV. The structure overlooks the plaza and the river and would have been prominent to river traffic in the 8th century. It has plain lower walls with three doorways, each of the which supports a well preserved lintel (Yaxchilan Lintels 1 to 3).

Most of the known buildings and monuments have been dated to the Late Classic period (ca. 600–900). The Late Classic architecture at Yaxchilán, as in Structures 6, 19, 20, 25, 30, 33, 39 and 40, features doorways with sculptured stone lintels, heavily decorated upper façades filled with stone and stucco sculptures, and high roof-combs (ornamented stone extensions above the temple roofs) pierced by holes and covered with sculptures. These features can be seen best in Structure 33 , which typifies the monumental architecture at Yaxchilán. This building is set on a hill that rises 50 m behind the Main Plaza and consists of a single row of vaulted stone rooms with three doorways, each with a carved stone lintel commemorating the accession of the Maya ruler Bird Jaguar IV. The heavily decorated façade above the doorways includes the remnants of three seated figures, and the great double-walled roof-comb, which rises another 6 m above the roof, included a huge figure of a man, assumed to be Bird Jaguar, seated on a throne.