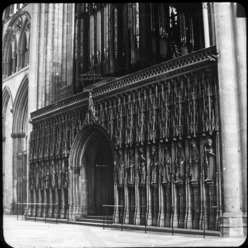 The Quire Screen dates to the 15th century. The 15 figures are Kings of England from William I to Henry VI.