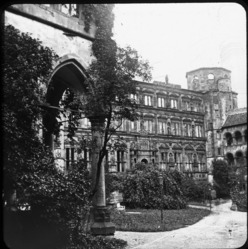 Heidelberg was the seat of the Electors Palatine from 1329. The castle, whose ruined buildings in the early 19th century were an important source of inspiration for the German Romantic movement, reflects Heidelberg’s greatest period of prosperity in the 16th century and the early 17th. The castle has only been partially rebuilt since its demolition in the 17th and 18th centuries. It is located 80 metres (260 ft) up the northern part of the Königstuhl hillside, and thereby dominates the view of the old downtown. The earliest castle structure was built before 1214 and later expanded into two castles circa 1294; however, in 1537, a lightning-bolt destroyed the upper castle. The present structures had been expanded by 1650, before damage by later wars and fires. In 1764, another lightning-bolt destroyed some rebuilt sections. From 1613 until work abruptly ceased in 1618, Salomon de Caus created the Hortus Palatinus, a garden in Italian late-Renaissance style (only fragments remain).