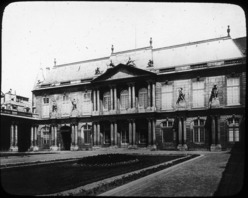 [The Hôtel du Soubise (former Hôtel de Clisson) was built on the site of the mansion of the Duc de Guise by Delamair between 1705 and 1712. The interior decoration is the work of Natoire, Boucher, Van Loo, Restout, Lemoyne and others. It has been the home of the Archives Nationales since 1808. The earlier entrance, the turreted Gothic gateway of 1380 (at 58 Rue des Archives) was part of the Hôtel de Clisson (1372-1375) built by the Constable Olivier de Clisson, a supporter of Charles V. The former Hôtel de Guise was to be transformed into a princely residence, and the stroke of genius was Delamair’s use of the old riding school as the cour d'honneur, surrounded on three sides by a colonnade of coupled composite columns that sweeps round in a curve behind the screen wall to the street, while at the other end of the court the motif of coupled columns is carried across the façade of the house, thereby achieving a closely interrelated composition. Delamair also produced designs for the interior layouts of the two hôtels, for the staircases and for the decoration of the appartements. Cardinal de Rohan continued to favour him for his own residence [the adjoining Hôtel de Rohan], but the Rohan-Soubise family considered his scheme, involving pièces en enfilade with doors on a central axis, to be old-fashioned and soon transferred its patronage to Germain Boffrand.