Mezquita: Exterior detail, part of the arcades of the old sahn or courtyard 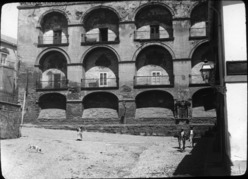