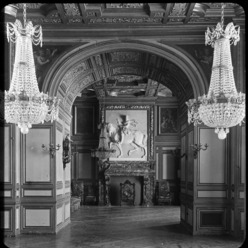 This room is in the donjon (keep), the oldest part of the palace. The relief over the fireplace is of Henry IV (1600, by Matthieu Jacquet), installed here in 1836 during a redecoration by Louis Philippe.