Saint-Maurice Castle: Overall view, showing castle at end of bridge over the Rhone 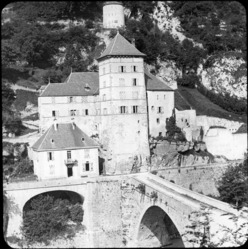 Saint-Maurice Castle is a castle in the municipality of Saint-Maurice of the Canton of Valais, an area once controlled by the Duchy of Savoy. In 1476, following the Swiss Confederation, Bern began construction of the castle in the narrow Rhone valley at Saint-Maurice. It was completed in 1646 with the expansion of the residential buildings. However, in 1693 a devastating fire in the town, destroyed the warehouse of the castle and much of the gunpowder that was stored there. The narrow canyon at Saint-Maurice facilitated both trade and defense. The bridge over the Rhone was built around the 12th century and was the first bridge upstream of Lake Geneva.