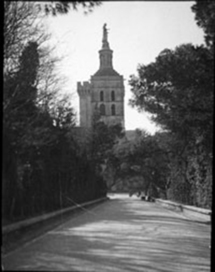 A Roman Catholic church in Avignon, France. A Romanesque building, constructed primarily in the second half of the 12th century. The building was abandoned and allowed to deteriorate during the Revolution but was reconsecrated in 1822. The most prominent feature of the cathedral is a gilded statue of the Virgin Mary atop the bell tower which was erected in 1859. The cathedral’s basic style in provençal Romanesque, with touches influenced by Greek and Roman architecture and later embellishments in the Gothic and baroque traditions.