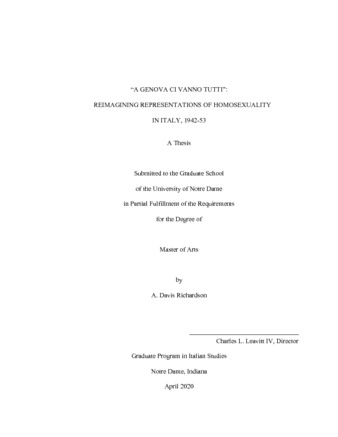 Despite official antipathy towards homosexual men under Fascism, homosexual characters in Italian cultural production began to emerge as early as 1942 with Alberto Moravia’s novella Agostino and the production of Luchino Visconti’s film Ossessione. This trend continued in the postwar period, even after the enactment of new censorship laws in 1948. It is now a commonplace that in films and literary texts of the early postwar years, representations of homosexuality fell almost exclusively into a tripartite paradigm of fascists-criminals-pedophiles—in line with cronaca of the time—with homosexual characters occupying one or more of those categories and often blurring the lines between them. While cases such as the villainous homosexual Nazis in the films of Roberto Rossellini, notably Major Bergmann and Ingrid in Roma città aperta (1945) and the pedophilic Herr Henning in Germania anno zero (1948), are by now classic examples of such allegory, it would be reductive to limit a study of non-normative sexuality in this period to the fascist-as-homosexual trope. Instead, in this thesis I seek to trace cultural representations of male homosexuality in Italy in order to demonstrate that vilification was far from the only strategy employed by Italian filmmakers and writers of the 1940s and 50s. In so doing, I account for such portrayals in cinema and literature of the first decade following the release of Moravia’s Agostino and the production of Visconti’s Ossessione, thus covering the period 1942 to 1953. Ultimately, this thesis contributes to a cultural history of homosexuality in the early postwar years by elaborating a series of thematic categories—cruising, language, and power imbalances—which may be helpful in reimagining how homosexual men were represented in the arts, as well as how they actually lived.