Vaishnava Ranganatha Temple complex: One of the multi-columned halls with a parade of soldiers of the Indian Army 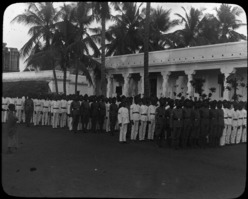 This is not the hall traditionally called the Hall of 1,000 Columns, which has sculpted columns with rearing horses trampling tigers.

The site contains two large temple complexes, the Vaishnava Ranganatha and the Shaiva Jambukeshvara. The Ranganatha, with its unique seven enclosures, is the largest temple complex in south India. The present temple was founded during the later Chola period, when Rajendra Chola (ca. 1025) is said to have used prisoners from Sri Lanka to divert the flood waters and create the island of Srirangam. Substantial additions were made in the 13th century under Pandya and Hoysala rulers. Construction continued in the 16th and 17th centuries under the patronage of the Vijayanagara and Nayaka rulers, and the latest gopura, on the south side, was not completed until 1987.