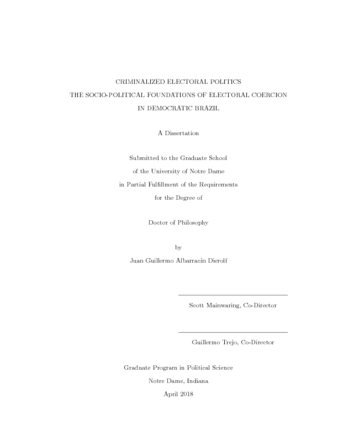 The growing political involvement of organized crime is one of the greatest threats to democracy in contemporary Brazil. This is most apparent during elections: seeking to influence electoral outcomes, politicians build alliances with criminal organizations to assassinate political rivals and intimidate voters. For example, in 2016’s municipal electoral cycle, at least 20 politicians were assassinated in the metropolitan area of Rio de Janeiro. After growing evidence of voter intimidation, electoral authorities requested federal security forces protect the integrity of elections in the city. Yet, in other cities, like São Paulo, criminals and politicians do not violently influence elections despite their ostensible presence. Why do politicians and criminals use violent tactics and clientelistic politics to influence elections in some cases but not others?

My dissertation explains the occurrence of criminalized electoral politics, the use of criminal violence and clientelism to influence electoral outcomes, in Brazil. For criminalized electoral politics to occur, (1) a politician must be willing and able to engage in a profitable, yet potentially costly, partnership with crime and (2) a criminal group must be able to act as a political broker. I argue that the strength of parties in electoral competition shapes politician’ incentives to pursue criminal alliances. When parties are significant forces in electoral competition, politicians are less likely to seek out these alliances. The overt use of violence and criminal tactics is a menace to a party’s image; therefore, parties will effectively dissuade their members from partnering with crime. In contrast, when politicians and their personalistic political machines are the center of electoral competition, there will be strong incentives to collude with criminal actors. Furthermore, the type of community politics impacts a criminal actor’s ability to become a broker. Criminal brokers are more common in areas with a history of clientelistic local politics. In contrast, peripheral communities with a history of civic activism are less likely to allow criminal encroachment of local politics.

I use the case studies of Rio de Janeiro, the Baixada Fluminense, and São Paulo to develop a theory of criminalized electoral politics. Using information collected over 17 months of fieldwork, I trace the markedly different paths of political development in the peripheries of these urban areas to understand why criminals and politicians engage in widespread criminal manipulation of electoral processes in Rio de Janeiro and the Baixada Fluminense but refrain from doing so in São Paulo. In a second step, I employ an original dataset of criminal political violence in over 5,560 Brazilian municipalities (2000-2016) and find that high electoral volatility is associated with the occurrence and intensity of criminal political violence.