Belief and Credence: A Defense of Dualism 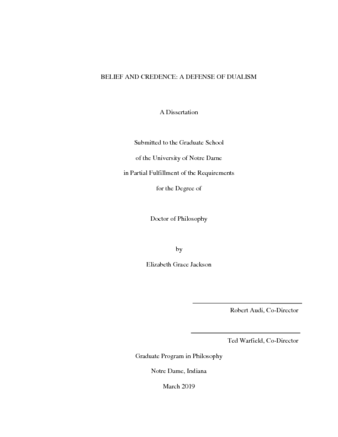 Belief is a familiar attitude: taking something to be the case or regarding it as true. But we are more confident in some of our beliefs than in others. For this reason, many epistemologists appeal to a second attitude, called credence, similar to a degree of confidence. This raises the question: how do belief and credence relate to each other? On a belief-first view, beliefs are more fundamental and credences are a species of beliefs, e.g. beliefs about probabilities. On a credence-first view, credences are more fundamental and beliefs are a species of credence, e.g. credence above some threshold. In this thesis, I develop and defend a third view that I call belief-credence dualism. On this view, belief and credence are independent, equally fundamental attitudes, and neither reduces to the other.

I begin by motivating the project: why should we care about the relationship between belief and credence? I argue it has broad implications for many debates in epistemology and beyond. Then, I defend dualism, arguing that it can explain features of our mental lives that a credence-first view and a belief-first view cannot. I also argue that dualism has attractive, interesting implications when applied to the pragmatic encroachment debate. Finally, I explore implications of dualism, both for the nature of evidence and how faith might go beyond the evidence but nonetheless be epistemically rational. I conclude that the human mind is, in some ways, complex, but we should be happy with this conclusion also long as each mental state we posit has a clear role to play.