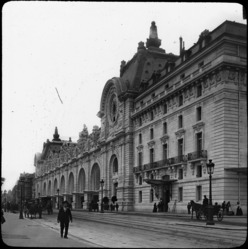 The Gare d'Orsay was opened in 1900 (to coincide with the Exposition Universelle) but with cessation of rail service in 1939 to the station because of the short platforms, lay abandoned until it was transformed into an art gallery and re-opened as the Musée d'Orsay in 1986. [Parts of the building, including the hotel had remained in use until 1973.] The change from steam to non-polluting electric power traction inside allowed the original rail station to be designed in an opulent single integrated space which influenced later large railway stations in the US. Architects of the 80’s renovation were Gaetana Aulenti and ACT Architecture (members: Renaud Bardon, Pierre Colboc and Jean-Paul Philippon).