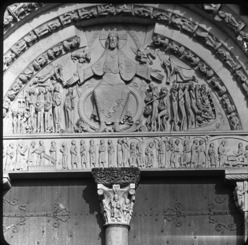 The tympanum and sculpture of the central portal of the west façade was carved in 1856-1857 by Pascal. The original had been destroyed in 1793, and only a few silhouettes remained. The subject of the tympanum is the Last Judgment and some of its iconography is copied from nearby Autun.

Former Cluniac abbey and pilgrimage church in Burgundy, France. Founded in the mid-9th century by Girart de Roussillon. Vézelay’s prosperity in the 11th and 12th centuries was based on its possession of the putative relics of St Mary Magdalene; the abbey declined from the late 13th century. The iconography of sculpture at Vézelay relates to the Crusades. A serious fire in 1120 appears to have necessitated the rebuilding of the nave, although the transept and choir, which may have suffered little damage, were retained. The polychrome masonry of the transverse arches, employing various limestones from local quarries, is visually striking and may derive from Spanish sources (e.g. the Mezquita, Córdoba). The restoration of St. Madeleine under the auspices of Eugène-Emmanuel Viollet-le-Duc began in 1840.