Piazza San Pietro: View of arm of colonnade and fountain 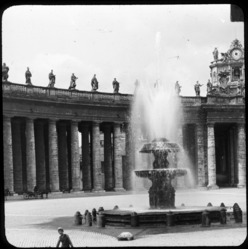 The obelisk marked a center, and a granite fountain by Carlo Maderno stood to one side: Bernini made the fountain appear to be one of the foci of the ellipse embraced by his colonnades and eventually matched it on the other side, in 1675, just five years before his death.

In transforming the small existing piazza, Bernini was expected to cater for several functions. “Four rows of simple and majestic Doric columns (300 in total) all carved from Roman travertine. This forms an oval 650 feet across the long axis marked by three monuments: positioned laterally by fountains propelling tall jets of water, and in the center, by an Egyptian obelisk that had served as a turning post in the chariot races at the ancient Circus of Nero. As they enter the piazza, the faithful are embraced by "the motherly arms of the church,” Bernini’s own description of his Colonnade. The Colonnade becomes simultaneously a dramatic frame for the church, a nurturing enclosure for the crowds of faithful, and a stage for the processions and other sacred spectacles on which, at this particular period, the Catholic Church so strongly depended for its appeal.“ p. 343. Ninety-six statues of saints and martyrs are atop the balustrade.