León Cathedral: View of stonework stacked in the interior transept 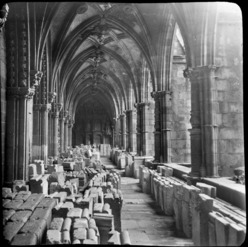 The Gothic cathedral is also popularly called The House of Light or the Pulchra Leonina, dedicated to Santa María de la Regla (S Maria de León). It is the purest reflection of French Gothic architecture in Spain, although its authenticity has been compromised by 15th and 16th century additions and several 19th century restoration campaigns. There has been building on the site since 800, when the first structure was erected over old Roman baths. León cathedral’s design is related to Reims Cathedral (reduced by about a third) through the work of Master Enrique, who is assumed to have been French. The porch of the west façade was inspired by the transept portals of Chartres Cathedral.