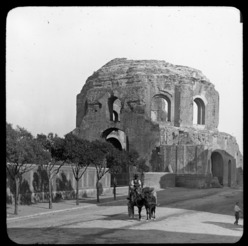 There is no mention of it in ancient literature or inscriptions. It was erroneously associated with the Temple to Minerva Medica mentioned by Cicero. In 1534 some antiquarians classed “Minerva Medica” as a bath because of its popular name, “Terme di Caluce”, but it was identified as a basilica by Biondo and his followers. It stands in what was the Licinian Gardens. The dome was created by brick ribs and concrete fill. It is now thought to be a Nymphaeum, a garden structure that involved the water supply for the Horti Liciniani (Licinian Gardens), on the Esquiline Hill. The decagonal structure in opus latericium is relatively well preserved, the full dome having collapsed only in 1828. It is surrounded on three sides with other chambers added at a later date.