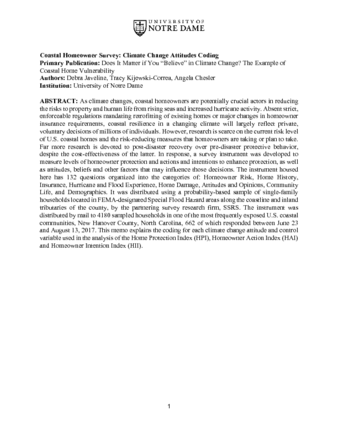 As climate changes, coastal homeowners are potentially crucial actors in reducing the risks to property and human life from rising seas and increased hurricane activity. Absent strict, enforceable regulations mandating retrofitting of existing homes or major changes in homeowner insurance requirements, coastal resilience in a changing climate will largely reflect private, voluntary decisions of millions of individuals. However, research is scarce on the current risk level of U.S. coastal homes and the risk-reducing measures that homeowners are taking or plan to take. Far more research is devoted to post-disaster recovery over pre-disaster protective behavior, despite the cost-effectiveness of the latter. In response, a survey instrument was developed to measure levels of homeowner protection and actions and intentions to enhance protection, as well as attitudes, beliefs and other factors that may influence those decisions. The instrument housed here has 132 questions organized into the categories of: Homeowner Risk, Home History, Insurance, Hurricane and Flood Experience, Home Damage, Attitudes and Opinions, Community Life, and Demographics. It was distributed using a probability-based sample of single-family households located in FEMA-designated Special Flood Hazard areas along the coastline and inland tributaries of the county, by the partnering survey research firm, SSRS. The instrument was distributed by mail to 4180 sampled households in one of the most frequently exposed U.S. coastal communities, New Hanover County, North Carolina, 662 of which responded between June 23 and August 13, 2017. This memo explains the coding for each climate change attitude and control variable used in the analysis of the Home Protection Index (HPI), Homeowner Action Index (HAI) and Homeowner Intention Index (HII).