Königsfelden Abbey: Overall view, courtyard with the main entry facade of the church 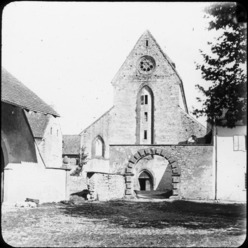 A former Franciscan monastery and former Clarisse convent between the medieval villages of Brugg and Windisch. It was founded in 1308 by Elizabeth von Habsburg. It marks the spot where her husband, Albrecht I, was murdered by his nephew, Duke Johann of Swabia. During the Reformation in 1528 it was secularized. The complex was then the residence of the bailiffs of Bern, and since 1868 it has been a psychiatric clinic. The church is now a museum (since 2009). It contains 14th century stained glass (ca. 1321-1330), one of the first instances of indigenous Swiss art. In 1894, under the guidance of Rudolf Rahn (1841-1912), one of the founders of Swiss art history, Robert Moser restored the Klosterkirche in Königsfelden Abbey, an outstanding example of the medieval architecture of the mendicant orders in Switzerland.