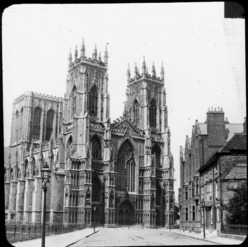 The Great West Window was paid for by Archbishop Melton and painted by Master Richard Ketelbarn between 1338 and 1339. The Flamboyant tracery is heart-shaped at the top; restored 1989-1990.