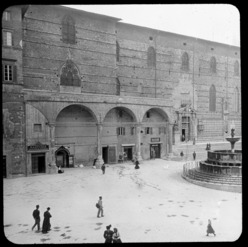 Loggia di Braccio in center and the Fontana Maggiore to the right. To the right of the loggia in the unfinished wall is a portal designed by Galeazzo Alessi (1568), a pulpit composed of ancient fragments and Cosmatesque mosaics, from which Saint Bernardino of Siena preached in 1425 and 1427 and a wooden Crucifix by Polidoro Ciburri (1540). The Fontana Maggiore is by Nicola and Giovanni Pisano.

Unlike most cathedrals, the cathedral of Perugia has its flank [side] on the city’s main square, facing the Fontana Maggiore and the Palazzo dei Priori. This side has the Loggia di Braccio commissioned by Braccio da Montone (1423), an early Renaissance structure attributed to Fioravante Fioravanti from Bologna. The main façade faces the smaller Piazza Dante and has a baroque portal designed by Pietro Carattoli in 1729. The sturdy campanile was constructed in 1606-1612.