Messina Cathedral: Overall view, from the Piazza del Duomo with the Fountain of Orion in foreground 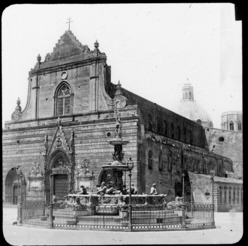 Before damage and restoration; the side volutes on the facade have been removed.

The Cathedral (12th century), contains the remains of King Conrad, ruler of Germany and Sicily in the 13th century. The building had to be almost entirely rebuilt in 1919-1920, following the devastating 1908 earthquake, and again in 1943, after a fire triggered by Allied bombings. The original Norman structure can be recognized in the apsidal area. The façade has three late Gothic portals, the central of which probably dates back to the early 15th century. The architrave is decorated with a sculpture of Christ Among the Evangelists and various representations of men, animals and plants. The tympanum dates to 1468. The interior is organized in a nave and two equally long aisles divided by files of 28 columns. Some decorative elements belong to the original building, whereas the mosaics in the apse are reconstructions.