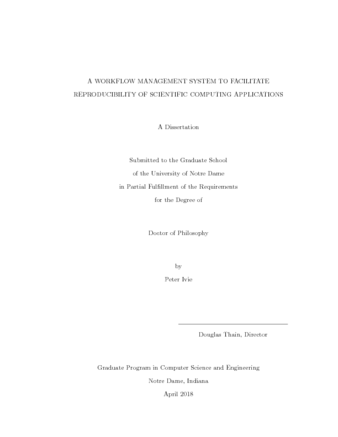 Reproducibility is becoming an increasingly challenging requirement of the scientific process. Compared to more human intensive scientific procedures, it would seem that scientific applications executed on computers could easily produce identical results despite slight changes to hardware, software, or simply timing. However, implicit dependencies on data and execution environment, coupled with ambiguous definitions of identity and equivalence throughout the process, make reproducibility rarely possible. To address this problem, I created PRUNE, the Preserving Run Environment. In PRUNE, every task to be executed is wrapped in a functional interface and coupled with a strictly defined environment. With this information PRUNE can directly execute each task. As a scientific workflow evolves in PRUNE, a growing but immutable tree of derived data is created. The provenance of every item in the system can be precisely described, facilitating sharing and modification between collaborating researchers, along with efficient management of limited storage space. I show that with a minimal amount of overhead, these capabilities can be available for large scale and complex workflows, such as an analysis of high-energy physics data, a bio-informatics application, and processing of U.S. census data. PRUNE also minimizes the cost of collaborative development of computational science.