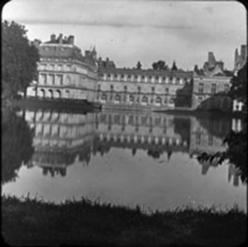 One of the largest French royal chateaux. Originally a medieval palace, Francis I (1494-1547) commissioned Gilles le Breton to build a palace in the new Renaissance style. Beginning in about 1528, the Gallery Francis I was constructed. The style of decoration developed here became known as the first School of Fontainebleau and became the first great decorated gallery built in France. Fontainebleau has served as a residence for the French monarchs from Louis VII to Napoleon III. It is now a national museum.